May 10 is next club meeting. In-person in URECC. We invite everyone interested in Amateur Radio, licensed or not, to come join us.

Program to be announced, but appears it will be the design and construction of simple antennas.

April 12
We had a great meeting this month with a really interesting 3D printer demo that included producing an actual part during the demo.

We still need a Field Day Coordinator. Considerable interest was shown, so the Coordinator will have folks willing to help, just need a leader. If you’re interested please contact one of the officers listed on the CONTACT page.

March 31
UAARC has just received word that we have been approved for ARRL Affiliation!!

March 23
FIELD DAY 2021!! Several members have asked if we are participating in FD this year. The BOD agrees we shall!! We think the virus is contained sufficiently that setting up in an open area is low risk. Now, we need the Field Day Coordinator to step forward – hi. Seriously, we do need to start planning now. The first step is enlisting a FD Coordinator. If you are interested, please contact one of the officers. The Coordinator does not have to do all the work, just be sure all the work gets done. We also need folks who can help the Coordinator, again contact an officer if you are willing.


March 10
We had a wonderful meeting March 8, back in the URECC building. We presented Charter Membership Certificates, had a guest speaker, passed out 2021 membership cards, had on display club tee shirts for sale, as well as iron/sew on patches and a large spread of cold cuts, sausage and cheese and Welcome Back cake. We had fellowship (eyeball QSOs) late into the evening. Also have three new members that have never been to the club before.

Be sure to plan on making the April meeting. We’ll have a good time again.

In person club meeting!!! March 8 at 7:00 PM in Upshur Rural Electric Coop auditorium1200 W. Tyler St., Gilmer, TX. Be sure to make this meeting, we have a lot planned.

Main Trading in Paris, TX is planning a March 13 (2nd Saturday) Tail Gate Sale. Be sure to watch their website for details. It is planned to be from 7:00AM to 11:00AM.

The February club meeting was held last evening on the club repeater. We had 22 stations and a good meeting on the air. Hopefully, this will be the last of on-air meetings as it is looking good that we may return to the URECC.

We had a unanimous vote of acceptance for the nominated Club Officers, as listed below. Kelly KD5S remains the groups.io moderator for the club.

The remainder of the meeting was spent talking about the many activities that the club will undertake in 2021. Some of which are; meet in-person again, apply for ARRL Affiliation, present Charter Member Certificates, consider 2021 Field day, tail gate sale and many more. Lot’s planned for 2021, so be sure to make the meetings to get “the rest of the story”, as Paul Harvey use to say.

Nominations for UAARC Club Officers are complete. Only one person for each office was nominated. The nominees are;

Any questions should be directed to the Nomination/Election Chairman – William, KG5SVM. Election information will be posted here so continue to watch for updates.

During the January 11, 2021 on-air club meeting, the By-Laws amendment to Article 5.1 was approved and will now read “Regular Club Meetings will be held once a month.”
Continue to watch this page for updates on February meeting. We have plans to meet in person in URECC auditorium pending the availability of their staff and the safety of meeting in person.

Remember 2021 dues are payable by the February Club meeting and need to be paid before your ballot is counted. See “Contact” page for details.

Officer nominations are being taken by our Nomination Chairman, William KG5SVM at this time. If you wish to nominate a dues paying member for office, contact that person to be sure they are willing to run, if the person is, ask William to add their name to the nominees.

Election normally would be held at the February 8 Club meeting; however, most likely that meeting will be on the air. Therefore mail-in ballots, to the club PO Box, will be taken until March 1, 2021. Results will be announced at the March 8 club meeting.

The DB224-E that Jerry WA5OKO donated to us weighs 38 pounds.  In order to raise it in the upright position, it required a nearly equal counterweight attached to the bottom, bringing the total weight to just under 80 pounds. Several hours were spent Saturday morning studying and designing the lift.  After a  quick lunch, the crew split into ground and tower members.  The first task after settling in atop the tower was to raise a gin pole and mount it.  Next the tower crew disconnected the Ringo Ranger for the ground crew to lower.

Next, the ground crew raised the DB224, now 40 feet long to the upright position, where the counterweight kept it for the trip up the tower. The tower crew clamped it into place atop the tower.  Testing yesterday after the installation showed a 13 dB improvement in receive performance.  We may need to increase the transmit power if we see the repeater now hears better than it talks.

Many thanks to the antenna party, and if you get the chance be sure to tell them so!  Please try the new antenna from you QTH and mobile as you can.

October 14. We had 17 in attendance at the club meeting and it was sure good to meet in person again. We voted on the club logo, had a program by Kelly KD5S on Fox Hunting which he will conclude at the November meeting, and great cookies, sausage/cheese and crackers supplied by our newly appointed Refreshment Chairperson, Jo Ann KA5AZK.

The club needs a photographer, if interested contact an officer or use the contact email on this website. Jo Ann KA5AZK took a charter member picture and 2020 officers picture. We make take another Charter Member picture at the December meeting, so make plans now to be there. See sidebar for meeting dates and times.

September 8. The club meeting was held using WebEx with 14 in attendance. Kelly, KD5S hosted the meeting and provided the program on lightning safety. See groups.io/uaarc for a link to that video.

Debbie, KI5BHT presented a logo contest. The club needs a logo for the webpage, groups.io, caps, vest, tee shirts, etc.. Please submit your design to Debbie or the club’s email (on the contact page) before October 9, 2020. We will vote on the designs at the October 12 (MONDAY) evening meeting.

The UAARC now has 21 dues paying members. Remember you have until the end of the year to pay your dues to become a charter member. However, to receive your Charter Member Certificate at the December Christmas party (club meeting) please pay your dues by no latter than the end of November, otherwise you will not receive your certificate until January 2021.

The UAARC Board of Directors met Aug. 18, 2020 for the first time. Minutes of the meeting will be on the Meeting Minutes page but the short version follows.

The main topic was how to resume eyeball meetings, which everyone seems to miss. For the September club meeting, Kelly KD5S offered to host a WebEx video conference. This is a secure Cisco product which will allow us to see one another again! For October, with cooling WX, it is thought we may have an outdoor meeting.

The next big news item is this website. The BOD approved the proposed url https://www.uarc.club which has now been donated to the club. The url ownership will remain with the officers, keeping it separate from the website developer.

The Secretary/Treasurer, Debbie KI5BHT has already secured the club’s mailing address and donated the box rent. She also will announce a club logo contest at the September meeting, so be there to join in on that project.

Remember to pay your prorated dues before the December meeting.

Another big news item – Jerry Ritchie WA5OKO has donated a factory new DB224-E to the club. This is a very significant donation, one that would make well established clubs drool, much less our start-up club. This is a professional-grade Andrews (now Commscope) VHF antenna for the Upshur County Repeater. Who’s up for an antenna party??

After Jerry donated a DB224-E to the club he came into possession of a new Bridge Com BCR-50V VHF Repeater to which he donated to the club!

The repeater was put on the air by Jerry WA5OKO and John W5BWC 9-15-20. The repeater came factory programmed, Jerry set deviation on his Service Monitor and it was ready to go on the air.

The Upshur ARES net used it for the first time 9-17-19 with excellent results. Any club would be thrilled to have this repeater, but we certainly are and owe Jerry a big Thank You!! 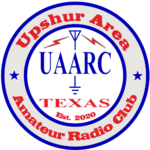 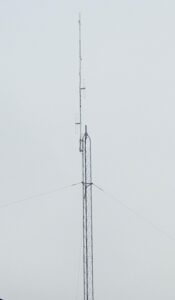 Please be patient as we work around the virus impacts as we schedule upcoming club meetings for 2021.